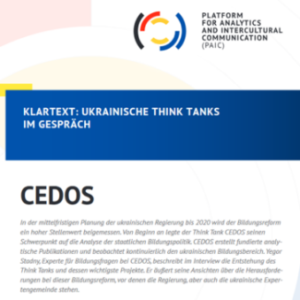 In the context of the project “Platform for Analytics and Intercultural Communication” (PAIC), the third interview of the “Klartext” series was published. Yegor Stadny from think tank CEDOS answers questions regarding the education reform in Ukraine. In the interview, Yegor Stadny, who is a policy analyst at the think tank CEDOS, addresses the reform process in detail, instruments in the fight against plagiarism and possibilities for a sustainable increase in educational quality. He presents first reform achievements and outlines the role of key players in the process, namely think tanks, the Ukrainian government and western donors.