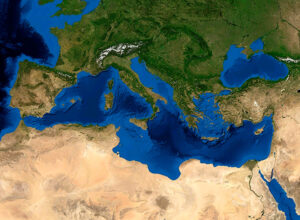 “From the EU’s perspective, 1989 was an annus mirabilis. The fall of the Berlin Wall and the end of the Cold War were events of great historical and geopolitical importance, not only for international relations, but more specifically for relations between the EU and the Mediterranean. This is not to say that the southern shore of the Mediterranean had been ignored, but the Cold War had overshadowed many of its problems and challenges. The southern Mediterranean had only served as a ‘security chessboard’ for the policies and strategies of the US and the Soviet Union. From a Western perspective, the southern Mediterranean was not seen as a region per se, but simply as a line of communication and a route for trade and oil flows that could be threatened by the presence of the Soviet Union. In short, the Mediterranean was perceived simply as a secondary theatre of antagonism between the superpowers.”