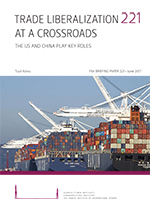 The overall developments in world trade have been weak since the financial crisis, but the increasing protectionism accounts for only a small part of the weakness. However, the foreseen stagnation of trade liberalization is likely to slow economic growth globally in the near future.

The economic relations between the US and China are not limited to trade and interconnected supply chains, as financial flows and fixed asset investments play a key role and have been beneficial for both parties. The strong relations imply that the likelihood of a full-blown trade war between the two countries is low as the countries share common interests, and significant restrictions on trade would be harmful for both.

The evolving role of China’s export sector with its own brands and increasing self-sufficiency means that an increasingly higher share of value added will remain in the country. At the same time, China has been reluctant in opening up a number of sectors to international investment, and its changing growth model means ttrhat the country’s growth will benefit the outside world less than before. Hence, tensions between the US and China are likely to persist, partly due to the fact that the financial crisis weakened the growth prospects in the US, which will probably push the country to safeguard its own interests more actively than before.

The US and China will play a key role when global trade policies are defined for the future. One of the key questions is whether the two countries can overcome their bilateral challenges, or whether it is possible that they will both try to concentrate on developing their own trade bloc.