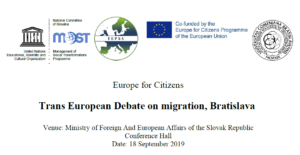 Peter Stano, coordinator for migration in the Ministry of Foreign and European Affairs of the Slovak Republic, opened the debate, which was moderated by  Lucia Mokrá, (Chairperson of the TEPSA Board and Dean of the Faculty of Social and Economic Sciences at Comenius University), and was attended by more than 40 citizens.

Read the full programme of the event here.