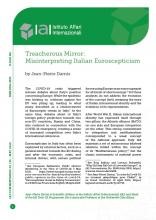 The COVID-19 crisis triggered intense debates about Italy’s position concerning Europe. While the epidemic was kicking in, criticism against the EU was piling up, leading to what many described as a reinforcement of Eurosceptic trends in Italy. At the same time, debates about of Italy’s foreign policy projection towards two non-EU countries, Russia and China, also surfaced in connection with the COVID-19 emergency, creating a sense of increased competition over Italy’s international references. Euroscepticism in Italy has often been explained by external factors, such as a general mistrust towards the EU during and after the economic crisis, and internal drivers, with certain political forces using Europe as an easy scapegoat for all kinds of shortcomings. Yet those analyses do not address the evolution of the concept itself, meaning the story of Italian international identity and the evolution of its representation.