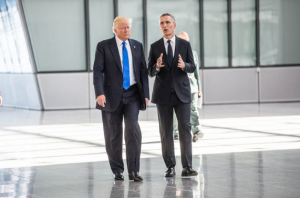 Coming hard on the heels of the G7 in Quebec, and featuring largely the same cast, is the NATO summit in Brussels. At the unveiling of the organisation’s new headquarters slightly over a year ago, Donald Trump cast doubt on Article 5 of the Washington Treaty, which spells out the commitment to mutual defence in the event of an attack by a third party, a comment he later rectified.

Shorn of this Article, NATO would turn into a mere bureaucracy, bereft of its soul. This time Trump is preceded not only by a letter in which he asks the laggardly allies, including Spain, to make good on their undertakings to increase their military spending, but also by a menacing leak: the Pentagon is scrutinising the costs of keeping its troops in Germany, raising the prospect of a possible significant reduction in its military presence in Europe. This currently comprises a force of 65,000, more than half stationed in Germany (the number reached 400,000 at the height of the Cold War).