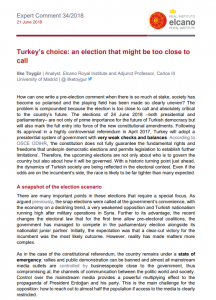 How can one write a pre-election comment when there is so much at stake, society has become so polarised and the playing field has been made so clearly uneven? The problem is compounded because the election is too close to call and absolutely critical to the country’s future.

The elections of 24 June 2018 –both presidential and parliamentary– are not only of prime importance for the future of Turkish democracy but will also mark the full entry into force of the new constitutional amendments. Following its approval in a highly controversial referendum in April 2017, Turkey will adopt a presidential system of government with very weak checks and balances.

According to OSCE ODIHR, ‘the constitution does not fully guarantee the fundamental rights and freedoms that underpin democratic elections and permits legislation to establish further limitations’. Therefore, the upcoming elections are not only about who is to govern the country but also about how it will be governed. With a historic turning point just ahead, the dynamics of Turkish society are being reflected in the electoral contest. Even if the odds are on the incumbent’s side, the race is likely to be far tighter than many expected.