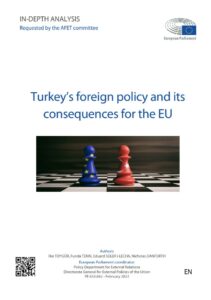 TEPSA has coordinated a study requested by AFET Committee of the European Parliament. The study was authored by Ilke Toygür, a CATS Fellow at the German Institute for International and Security Studies (SWP-Berlin), Germany, Funda Tekin, the Director of the Institut für Europäische Politik (IEP), Germany, Eduard Soler i Lecha, a Research Fellow at the Barcelona Center for International Affairs (CIDOB), Spain, and Nicholas Danforth, a Senior Research Fellow at the Hellenic Foundation for European and Foreign Policy (ELIAMEP), Greece. The study is entitled “Turkey’s Foreign Policy and its Consequences for the EU”.

The present impasse in EU-Turkey relations is attributed by Europeans to Turkey’s democratic backsliding and increasingly unilateral foreign policy. This, however, cannot be considered separately from the current state of institutional affairs and blurring of frameworks obstructing EU-Turkey cooperation in foreign and security policy. This study takes these elements into consideration while introducing different frameworks of Turkey-EU relations, namely Turkey as: (i) a candidate for accession; (ii) a key partner in economy and trade; as well as (ii) a strategic partner. The study then focuses on the overall dynamics of Turkish foreign policy-making, its relations with historical allies and approach to theatres of power in its neighbourhood. To understand better the consequences of Turkish policies for European security, the study assesses the country’s key recent foreign policy principles, such as the ‘strategic-depth doctrine’ and the ‘blue homeland doctrine’ as well as the situation in three Mediterranean hotspots. A short evaluation of the presidential system’s impact on foreign policy and the country’s relations with the United States are also included. The analysis ends with an overlook to the future and policy recommendations for decision-makers in Europe.