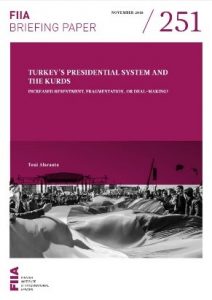 The Kurds are an ethnic group of approximately 35 million people, half of whom live inside the Republic of Turkey, where the conflict between the state and the Kurdish separatist PKK organization has now lasted for over three decades.

After a promising peace process in 2009–2015, the AKP government under President Recep Tayyip Erdoğan has now reduced Turkey’s Kurdish question to anti-terror operations, and marginalized the legal Kurdish HDP party, echoing the failed policy of the 1990s.

Turkey is now a presidential system where power is tightly concentrated in the hands of President Erdoğan, a development directly opposed to Kurdish demands for greater local autonomy in the Kurdish-majority districts.

Through the PKK network and transnational Kurdish sympathies, the fate of Syria’s and Turkey’s Kurds is now inextricably intertwined. The current way of building the new regime in Turkey is likely to produce more PKK attacks, but also widespread resentment among ordinary Kurds, including those opposing the PKK.

To read the full paper: https://www.fiia.fi/en/publication/turkeys-presidential-system-and-the-kurds