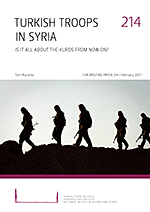 From 2011 to August 2016, Turkey aimed for a regime change in Syria by arming various Islamist and jihadi factions, without direct military intervention.

The direct military intervention that began in August 2016 is designed to block the continuous enclave of PKK-affiliated Syrian Kurds, and to clear the border areas of Islamic State (Daesh) militants. It also serves to establish a sanctuary for Turkey-backed Syrian Islamist rebels.

If the Syrian government allows Kurdish autonomy within a federal state structure, Turkey will try to use both conservative Syrian Kurdish groups and proxy Islamist groups in order to destroy such an autonomous PKK-affiliated state structure next to its border.

Regarding Syria, Turkey is now returning to the long-held republican strategic culture that refrains from regime-change attempts in other countries.