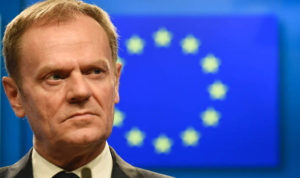 The idea of Tusk is to discuss a series of important files in the European Council on which so far no agreement has been reached. For that purpose, the President proposes a number of 12 summit meetings to be held up to June 2019, some of them informal and some of them to be held outside of Brussels.

Tusk is of the opinion that the Agenda has to be dealt with by all 28 Member States, or 27 depending on the subject. According to the President, unity between the Member States can thus be preserved. On the other hand, he states, this approach does not prevent Member States moving forward more rapidly in specific areas, in accordance with the treaties, while keeping the door open for those who want to join later. That, apparently, is a reference to enhanced cooperation.

Tusk’s credo as embodied in his letter to the heads of state and government of 17 October is: unity cannot become an excuse for stagnation, however, at the same time ambition cannot lead to divisions.

A list of topics, legislative or otherwise, related to a variety of crucial subject matters and to be negotiated at the highest political level of the EU, is a unique approach. On the other hand, Tusk is clearly of the opinion that the traditional way of discussing and negotiating is still the best working method for the EU. That said, surprisingly no innovative ideas as proposed, for example by Emmanuel Macron in his Sorbonne speech of 26 September or by Jean-Claude Juncker in his State of the Union Address of 13 September, have been included in the Agenda.

The question arises whether Tusk’s approach can be successful. When individual topics are discussed, it is hardly probable that Member States having important reservations regarding a proposal at stake will make concessions. Therefore, it seems that the President’s approach can only be successful when the result is a sort of package deal that can be agreed upon. By the way, in all this we must take into account that the European Parliament has a role to play in practically all, if not all, files included in the Leaders’ Agenda.

What, however, if Tusk’s initiative will not lead to positive results? His alternative idea – to have enhanced cooperation applied – is directly linked to the fulfilment of the conditions laid down in the present treaty texts. Yet, that alternative approach can hardly serve as a remedy because enhanced cooperation is an option available for smaller groups of Member States, composed of at least 9 of them. The way this principle is framed in the treaties makes it difficult to apply. Moreover, so far enhanced cooperation has been practised in only a few cases. On the contrary, what the EU urgently needs these days is real progress supported at least by a vast majority of Member States.

Therefore, let’s see whether Tusks model is practicable. In case, however, his approach will fail, real new and innovative ideas must be tabled again. A different, and simplified, model of enhanced cooperation compared to the one existing at present, must be one of them, to serve as a tool to enable the EU to really move forward.

In this context one can only repeat what the President has said: unity cannot become an excuse for stagnation, however, at the same time ambition cannot lead to divisions. Now, that statement should also imply: if stagnation remains, no ambition is shown, and unity cannot be maintained, it is better to allow (vast) fore runner groups to pave the way. As long as no Member State will be excluded from such future developments, there should be no fear that divisions within the Union will occur.