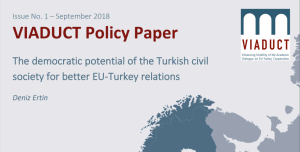 The first VIADUCT Policy Paper, authored by Deniz Ertin (CETEUS – University of Cologne), has just been published and can be downloaded here.

This policy paper aims at examining the democratic potential of Turkish civil society and seeks to outline policy initiatives that could strengthen societal bonds between Turkey and the European Union (EU). Such measures could have a positive effect on the Turkey-EU-relations. This paper considers the necessity of fundamental support of civil society organisations (CSOs) with pro-EU attitudes, to counterbalance the one sided support of anti-EU CSOs and the democratic setbacks since 2013. The later culminated just recently in the last presidential and general elections on 24th of June 2018 with a new and more authoritarian constitution.

Deniz Ertin (M.A.), is a doctoral student at the Jean Monnet Chair of Prof. Dr. W. Wessels, CETEUS – Centre for Turkey and European Union Studies, Institute for Political Science and European Studies at the University of Cologne. He studied in Copenhagen and Cologne and worked as a student assistant and lecturer at the University of Cologne. Since 2016 he heads the constituency office and is speaker of Arndt Klocke, parliamentary group leader of Alliance 90/ The Greens and Member of the State Parliament of North Rhine-Westphalia.