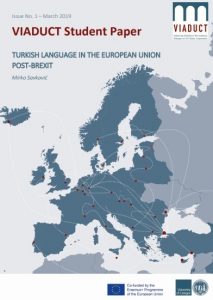 The VIADUCT Student paper on “Turkish language in the European Union post-Brexit”, written by Mirko Savković, is now available.

“Linguistic diversity is one of the prominent characteristics of European society, and one which is celebrated in ‘In Varietate Concordia’ (English: United in Diversity), the motto of the continental union. In total, twentyfour official languages are used in the corridors of Brussels’ institutions (Baaij, p 1, 2018), while an even larger number of others are used throughout the continent.

Three out of twenty-four official EU languages are dominant and enjoy the so-called procedural languages status. These are English, French, and German (Europa.eu, 2013).

Turkish is not one of the official languages of the European Union despite its formal co-official status on the island of Cyprus. In this respect, Turkish (euractiv.com, 2018) is one of only two languages which are official in an EU member state, but not at the level of the Union, the other being Luxembourgish (Morgan, 2016a).

In this paper, I will examine three different proposals for changes to the European post-Brexit linguistic policy, and how these models may affect Turkish language in Europe. Furthermore, I argue that linguistic policy towards the Turkish language may be of wider importance to relations between Turkey and the European Union, as well as in the process of integration of Turkish communities within the EU.”