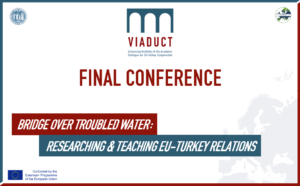 In order that the discussion can still take place in lieu of the Brussels conference, our keynote speakers, political science scholars and legal academics, have presented the VIADUCT Working Groups’ results in video format. Be part of the discussion, exchange your views, and listen to the findings of three years of research and teaching activities!

In this video, Tomáš Weiss, Deputy Director for Research at the Institute of International Studies at Charles University and Jean Monnet Chair in EU International Relations and Diplomacy Studies, summarises his contributions to the VIADUCT Annual Conference. As Chair of the fifth VIADUCT Working Group, Tomáš Weiss elaborates on the group’s findings on the Future of Europe, analysing the history of European integration and examining the potential effects of the coronavirus pandemic on the process.

In this video, Anke Schönlau, Research Associate and Executive Manager of CETEUS, University of Cologne, elaborates on her contribution to the VIADUCT Annual Conference. As Chair of the sixth VIADUCT Working Group, Anke Schönlau examines the evolution of narratives surrounding EU-Turkey relations in the German Parliament, and analyses the likelihood of a changing EU approach to relations in the upcoming German Presidency of the Council of the European Union, including a potential reform to the Customs Union. This video was realised in cooperation with the TRIANGLE project, funded by Stiftung Mercator.

In this video, Özgehan Senyuva, Associate Professor from the Middle East Technical University Faculty of Economics and Administrative Sciences Department of International Relations, summarises his contributions to the VIADUCT Annual Conference. He examines President Erdoğan’s narratives surrounding the EU and Germany, how this affects public opinion in Turkey, and what this may mean for EU-Turkey relations during the German Presidency of the Council of the European Union. This video was realised in cooperation with the TRIANGLE project, funded by Stiftung Mercator

In this video, Diğdem Soyaltin-Colella, Assistant Professor at the Department of Political Science at Altınbaş University in Istanbul and academic director of the Jean Monnet Module on EU Good Governance Promotion Inside and Beyond Its Borders, summarises her contribution to the VIADUCT Annual Conference. As a member of the fourth VIADUCT Working Group, Diğdem Soyaltin-Colella elaborates on what EU-Turkey relations teaching looks like, why it may need some reform, and what that reform may look like. Diğdem Soyaltin-Colella is the winner of the VIADUCT Teaching Paper competition, 2020 edition.

In this video, Selcen Oner, Assistant Professor at Bahcesehir University in Istanbul summarises her contribution to the VIADUCT Annual Conference. She elaborates on common challenges facing Turkey and the EU as regards migration, and offers a numbers of steps forward in EU-Turkey cooperation on this matter.

VIADUCT – Enhancing VIsibility of the Academic DialogUe on EU-Turkey CooperaTion

VIADUCTis a project aiming at creating an academic network linking universities and think-tanks from the EU, Turkey and the neighbourhood to build knowledge on EU-Turkey Cooperation. VIADUCT gathers a network of 40 partners and one extended network partner from all EU countries, Turkey as well as from Egypt, Georgia, Iceland, Iraq, Israel, Norway, and Switzerland.