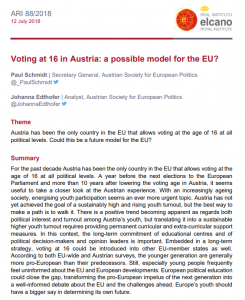 Austria has been the only country in the EU that allows voting at the age of 16 at all
political levels. Could this be a future model for the EU?

For the past decade Austria has been the only country in the EU that allows voting at the age of 16 at all political levels. A year before the next elections to the European
Parliament and more than 10 years after lowering the voting age in Austria, it seems
useful to take a closer look at the Austrian experience. With an increasingly ageing
society, energising youth participation seems an ever more urgent topic. Austria has not yet achieved the goal of a sustainably high and rising youth turnout, but the best way to make a path is to walk it.

According to both EU-wide and Austrian surveys, the younger generation are generally more pro-European than their predecessors. Still, especially young people frequently feel uninformed about the EU and European developments. European political education could close the gap, transforming the pro-European impetus of the next generation into a well-informed debate about the EU and the challenges ahead. Europe’s youth should have a bigger say in determining its own future.