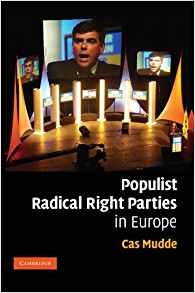 The online presence of far-right organizations, activists, and figures, and the dissemination of their ideas through social networks, have become bogeymen for most political commentators. While researchers agree that social networks allow these political entrepreneurs to disseminate their ideas, it is still unclear how these exchanges are produced and what their content is.

In order to answer these questions, I conducted research* with Bharath Ganesh (Oxford Internet Institute) and presented the findings in the journal European Societies: The transnationalisation of far-right discourse on Twitter.

We studied various far-right formations, that is, political parties and social movements that are characterized by their ethnocentrism and authoritarian vision of society, in line with Cas Mudde’s definition presented in the book Populist Radical Right Parties in Europe (Cambridge University Press, 2007).

We proceeded by examining Twitter exchanges between these formations, their activists, and their leaders in four Western European countries: France, Italy, Germany, and the United Kingdom. The idea was to identify – despite the national specificities – common dissemination networks, and define their characteristics, shared ideas, and promoters. To this end we studied the transnational circulations of their digital discourses.