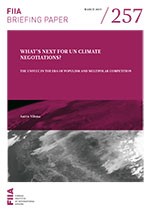 Antto Vihma, What’s next for UN climate negotiations? The UNFCCC in the era of populism and multipolar competition, 03 2019

After the agreement reached in Katowice in December 2018, The Paris Agreement is finally operational. This is a major diplomatic achievement.

Two large-scale political developments have cast a shadow over the implementation phase of the Paris Agreement: the rise of right-wing populism and emerging multipolar competition. The evidence so far seems to suggest that right-wing populism often frames climate change as an elite agenda – and international agreements are perceived as a pet issue of the corrupt elite, at odds with the interests of the people. Relatedly, tightening competition among great powers makes multilateral cooperation and consensus-based decision-making among 197 parties increasingly challenging.

With the Paris Agreement in place, the UNFCCC can provide a long-awaited legal framework for national climate contributions, but it will not be able to increase the ambition of national climate policies via multilateral negotiations.