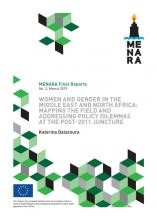 This report offers a “map” of the diverse situations of women in the post-2011 MENA region. It shows that there have been tremendous achievements and improvements in the lives of women in health and education but less progress in employment; and that legal inequalities remain widespread, as do limitations on women’s participation in politics and civil society. The report analyses the impact of recent events, particularly the conflicts, but also the political opportunities that came about as a result of the 2011 Arab uprisings. It also touches on the situation of LGBT (lesbian, gay, bisexual and transgender) individuals, and specifically their mobilization and changing attitudes towards their rights. The report ends by focusing on Western gender policy in the region. It argues for an approach that balances the ethical demands of individual and collective rights, and for a liberal position that respects and supports women’s and LGBT rights without being overly prescriptive about the values and choices that should govern the lives of individuals.