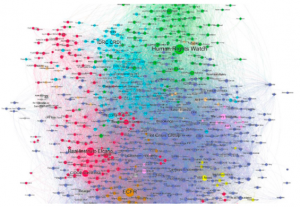 The presence of women in think tanks is still lower than that of men but, in addition, female influencers seem to be less influential in Twitter than their male counterparts. In addition, gender studies are hardly taken into account in the different fields of the analysis of international relations.

During 2018 we have monitored the network of relationships of the world’s leading think tanks and some of its analysts and have added a small network of gender research centres and activists, and women analysts interested in these issues. Our representation of reality, however, gives rise to certain questions: how large is the female presence in think tanks?; how do gender studies relate to the rest of the international relations field?; and how does the gender focus flow within the network?