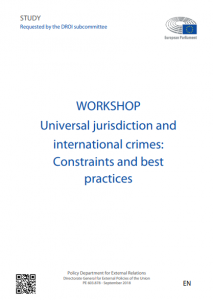 TEPSA has recently coordinated a publication for the European Parliament’s Subcommittee on Human Rights (DROI) on “Universal jurisdiction and international crimes: Constraints and best practices”.

The report is divided in three parts: the report on a workshop by the DROI and two different briefings on the topic.

The first briefing examines the role which the EU has played, and could play with respect to universal jurisdiction, in particular in its external relations. Although universal jurisdiction is exercised by EU Member States, it also represents an EU value which the EU may want to promote in its relations with the wider world, by means of a variety of mechanisms, including funding, capacity-building, and knowledge-sharing. The EU should nevertheless embed its support for Universal Jurisdiction in a wider international accountability strategy. In this strategy, the EU should also support international crimes prosecutions in the state with territorial jurisdiction, as well as enhanced mechanisms of international cooperation, consultation, and legal assistance with respect to international crimes.

Finally, in the second briefing the exercise of universal jurisdiction is examined, which is a key element of the global ‘fight against impunity’ of crimes under international law, such as genocide, crimes against humanity and war crimes. Contrary to the common ‘rise and fall’ narrative, recent empirical data shows an increase in the number of universal jurisdiction cases during the past decade. At the same time, there are indications of a shift from the prevalent ‘no safe haven’ paradigm to a ‘complementary preparedness’ approach to universal jurisdiction, reflecting the underlying idea of a transnationally organised and multi-level system of international criminal justice based on the sharing of labour between various stakeholders. The briefing concludes with recommendations to the European Union in order to expedite the goal of ending impunity of gross violations of human rights.