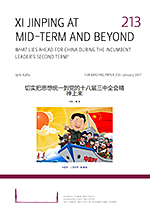 Xi Jinping is the “core” of the Communist Party leadership, but so far only by the grace of the Party. During his second term, starting later this year, he may aim to turn the collective leadership into a tool for his personal empowerment.

Due to his nationalism and conservatism, Xi is essentially a populist leader. This may severely hamper the predictability of China’s actions.

China’s domestic politics and economy are falling under short-termism, exclusively serving the finalization of the “moderately prosperous society” in 2020. Any reforms which threaten the desired 6–7% annual growth may be postponed.

China wants to strengthen national security, which is predominantly viewed as safeguarding the Communist Party rule. The room for manoeuvre for civil society is likely to keep shrinking.

The Trump presidency is likely to create further instability and unpredictability in the Asia-Pacific region. Trade and financial policies, South China Sea territorial disputes, and the Taiwan Issue are among the potentially contagious issues related to China.