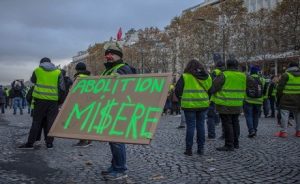 The relatively modest but nevertheless paralysing movement of the gilets jaunes, or ‘yellow vests’, has caught France, and French politics, off guard. It could be argued that it is Europe’s first rebellion against the ecological transition, to an economy free of fossil fuels, with the EU heralding the beginning of the end for 2050. The ‘yellow vests’ are a movement of the sort that politicians are ill-equipped, yet again, to respond to: spontaneous, social media-driven –although enjoying the support of the traditional media and users of change.org– without leaders, without spokesmen, non-party (indeed they reject political parties), side-lining trade unions (which were caught unawares) and pressure groups (…)

To read the full article, also accessible in Spanish: https://blog.realinstitutoelcano.org/en/yellow-vests-the-first-rebellion-against-the-ecological-transition/