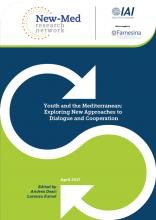 Youth are among the most active demographic group to have challenged the authoritarianism of the state before, during and after the 2010-12 Arab uprisings. Yet, youth in the MENA still suffer from the highest unemployment rates in the world and the chronic lack of jobs and opportunities are widely considered a significant factor fuelling radical ideologies in the area. While many studies have focused on the category of “youth” in the Arab world, it is rare to hear how young people themselves view and interpret developments unfolding in their societies. Rarer still is to have these voices contribute to ongoing policy debates on the future of the Mediterranean. This edited volume collects the revised and updated versions of eight policy papers produced by outstanding young scholars and activists from the Middle East and North Africa. Their works, focused on topics such as climate change and environmental degradation, state-society relations, radicalization and the migrant and refugee crisis, were presented during an international conference held at the Italian Ministry of Foreign Affairs and International Cooperation on 19 January 2017.